A simple recipe with honey, sugar, egg white and almonds, turned out into the essential sweet of any Christmas meal, in Spain, and into the famous Spanish candy in the world.

Torrons Vicens, one of the oldest Catalan brand of torrons, and its pastry chef and Nougat Master Angel Velasco, worked with one of the most acclaimed Chefs of the world, to create a special collection. Inspired by different deserts that Albert Adria made for “El Bulli”, these varieties surprise the palate and place the turróns in the highest gastronomy.

While today a number of different varieties exist, and regions have their own special recipes, the history of turrón can be traced back to one common origin: the Moorish Conquests of the early Middle Ages.

The turrón was originally elaborated by the Moors, 500 years ago, in the small town of Jijona, just a few kilometers north of Alicante. A document dating back to 1582 claims that it was common for patrons to offer their workers turrón around Christmas time, and a few years later a law was passed by King Felipe II restricting the amount of turrón which could be purchased by each household. While honey was used in the preparation from the beginning, it would seem that sugar was only added to the list of ingredients when the first cane plantations were discovered in South America.

Presently, Jijona remains the turrón capital of the world, followed by Alicante. Only the turróns produced in these 2 cities of the Valencian Community, and Torró d’Agramunt, in Catalonia, received the official Denominación de Origen, the European Union origin-of-quality seal which officially recognizes the product as being of high quality and providing excellent taste.

There are two traditional types of turrón: the soft Jijona or turrón blando, which is smooth with a consistency of peanut butter, and hard Alicante or turrón duro, a thick almond nougat candy.

Turrón itself can take on a variety of consistencies and appearances, however they traditionally consisted of the same ingredients. Some thirty years ago, almost all turrón recipes followed the same specifications, but today there are dozens of varieties: chocolate with puffed rice or whole almonds, with liquor, candied fruits or whole nuts, fruit pralines, sugarless variations or raw-vegan ones.

You can find some of the best turróns of Barcelona at: 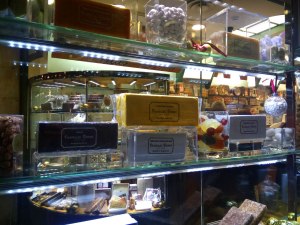 Planelles Donat is possibly the most famous Barcelona turrón shop. This family-run business opened in 1850. You can choose, here, the traditional flavors: Xixona (soft almond), Alacant (hard almond), Crema Catalana (egg and burnt sugar) and Nata Nous (walnut and cream), besides a variety of chocolates.

Torrons Vicens is a famous family brand from Lleida has been making turrón and candy since 1775. They’ve open several shops in the center of the Barcelona and, in their hometown, Agramunt, a museum of the history of turrón.

La Campana, founded in 1890 by a Valencian family, is on Princesa street, close to Picasso Museum. They sell turrón all year around, and ice cream and horchata in the summer, turrón ice cream included. They also have a crêperie in Flassaders street, with a lovely terrace overlooking the back of the Picasso Museum.

The team of Petit Brot restaurant in Barcelona creates raw-vegan turróns with dates, lúcuma and mezquite, for natural sweetness, and coconut flower sugar, for texture.  You can find Petit Brot on our Slow Food Route.