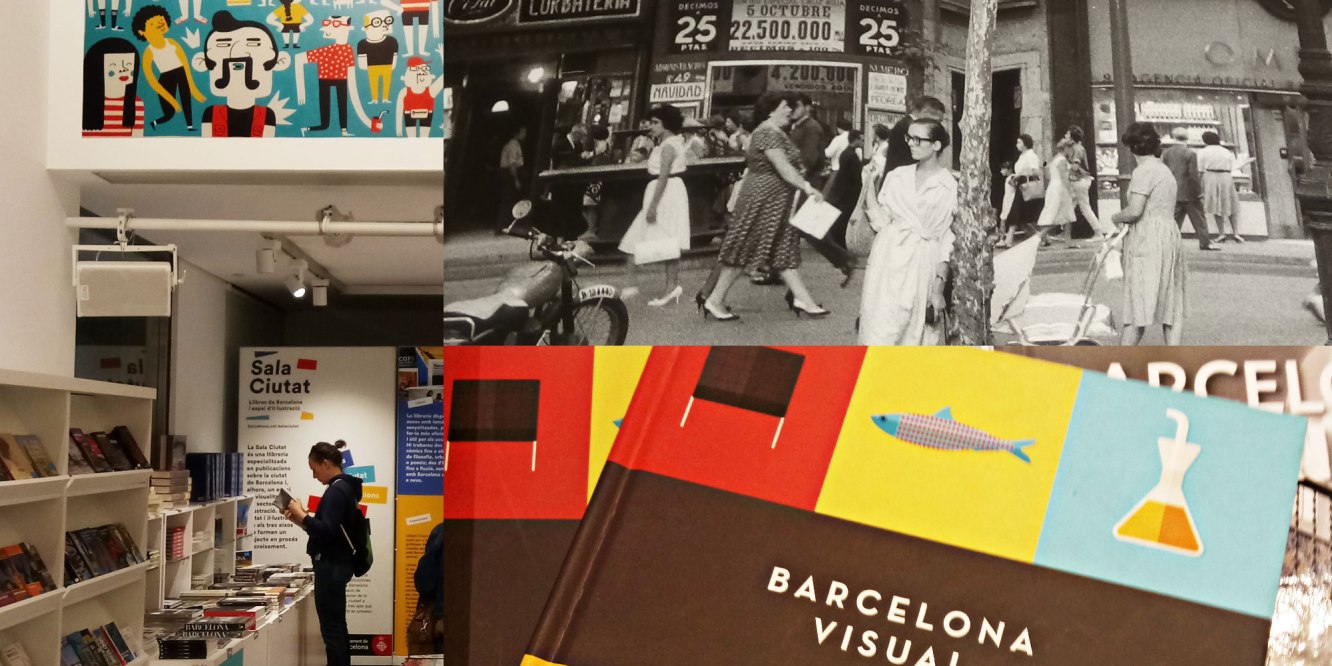 Sala Ciutat, translating into the City Room, is the place for books about Barcelona. History, architecture, vintage and contemporary photography, city illustration, customs, secrets, symbols, districts – briefly any topic on Barcelona can be found, here. 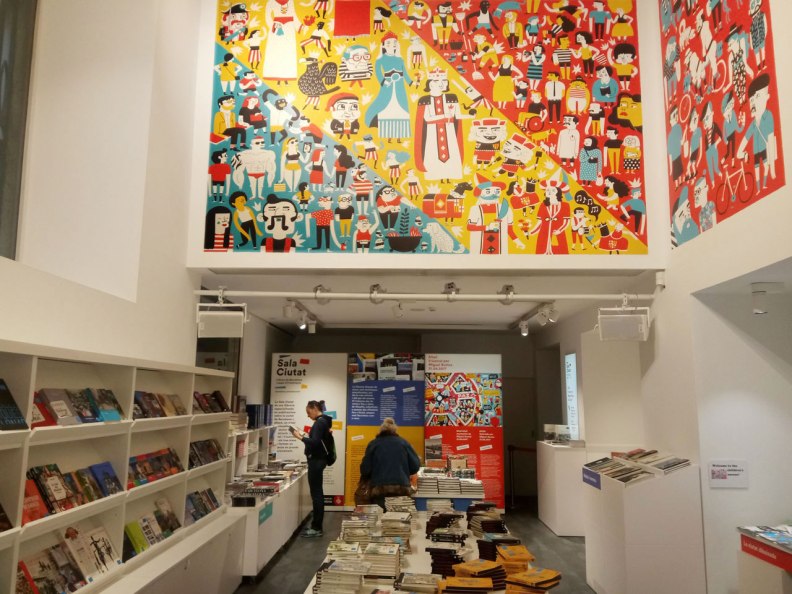 When browsing through the books it’s easy to find out original stories on Barcelona, especially as most books focus upon photography, illustration, city symbols and city neighborhoods. There’s an entire collection dedicated to each and every barrio of Barcelona, so only this might be enough to ensure a different approach on your city walks.

Let’s take the Ramblas, for instance. It’s one of the most touristic and crowded places of the city, still it’s got something, a je ne sais quoi, a special vibe. Below are some original ways of seeing the Ramblas in the photographs of Frederic Ballell, illustrating Ramblas in 1907 – 1908, and showing about how much of the old habits of taking a promenade are still alive today – or not.

Then, if interested in a special atmosphere or light, you can see the place through the eyes of Gerard Rosés, renowned Catalan artist, whose hand drawings are published in the book of The Drawn City. 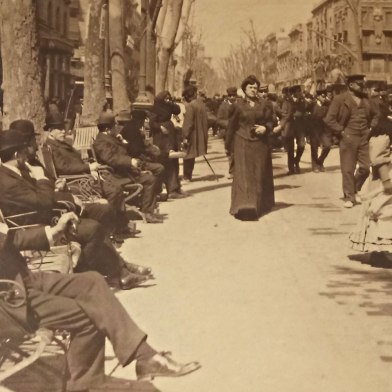 La Rambla 1907 – 1908, a selection of 74 photographs from the exhibition that features La Rambla and the figures that give the street its colourful character. Photographer Frederic Ballell (1864-1951), one of the main first-generation exponents of photojournalism, captures in this series of photos the daily life of one of Barcelona’s main thoroughfares at the turn of the century. Rafel Torrella (Photography), Marta Delclós (Text) 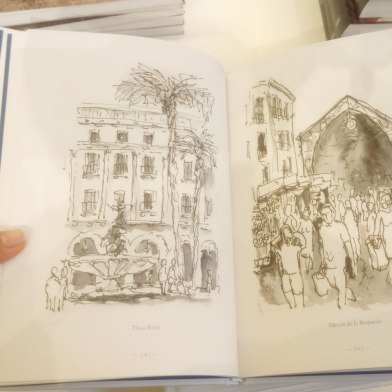 Barcelona La Ciutat Dibuixada is a collection of drawings by Catalan artist Gerard Rosés, depicting the main sites of the city. Here, there is Plaça Reial, on left, and La Boqueria Market, on right page.

Or you can enjoy a large format photo book of the Barcelona of 1959, as seen by Leopoldo Pomés one of the renowned photographs of these times, who has intensively worked with advertising, models and nudes, as well as with photo reportage, having large series of photos of everyday Barcelona.

Another local icon of Barcelona is, among many others, the brand of Cacaolat, continuing the rich history of chocolate in Barcelona. La Granja Viader, the oldest farm in Barcelona (and just a few steps away from Las Ramblas), with over 150 years of history, was the place where Cacaolat was born and sold, until the late 60s’ when Clesa bought the brand, and the book below, documenting a retrospective on Advertising and Ephemera in Barcelona, includes all their ads, among many others on food and beverage, clothing, luxury items, household goods, cars… By the way, you can still have hot chocolate (and many other sweet treats) at La Granja Viader.

This book by Víctor Oliva Pascuet Oriol Oliva Sanosa documents the advertising history of the city from 1950 to 1950. It is full of visuals depicting everything from packaging design to large outdoor billboards, grouped by industries. 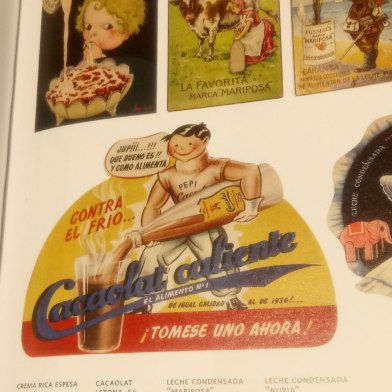 In the food and beverages chapter we find, for instance, all major brands, including the local Cacaolat, now an important brand, that was born at Xuclà Street, a small street in the Raval Quarter, in the Catalan Granja Viader, where even today you can enjoy a good snack. In an article in the newspaper El Pais published in April 2011, Mercè Casademunt Viader, the owner of Granja Viader, told about Cacaolat: “My great uncle [Josep Viader] wanted to use skimmed milks, which nobody ate back then. People needed taking fat, so they ate a lot of butter and whole milk. After trying a cold chocolate drink on a trip to Hungary, Viader proposed replicate and fabricate industrially. “He brought a chemist there and started doing tests until they found the formula.”

Sala Ciutat is located on one of the narrow streets of the Gothic area, namely on the Carrer de la Ciutat. The history of the building goes back centuries ago and is linked to various extensions carried out on the Barcelona City Council Buildings. Now, it is a bookshop specialised in publications in Barcelona and showcasing the work of local illustrators visions of the city.

The wide range of publications runs from comics to works on philosophy, city planning and poetry, as well as books ranging from history to fiction, all with Barcelona as their common theme. 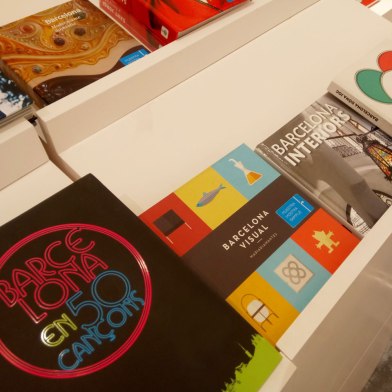 Mariadiamantes is the graphic design and illustration studio of Clara Mercader, artist and designer based in Barcelona. Her projects include works for clients such as Volkswagen, Amazon, Ajuntament de Barcelona, Estrella Damm or Banc de Sabadell. “Barcelona Visual” is a personal project, now published as a book, including 50 icons of the Catalan capital, all with illustration and explanatory text. 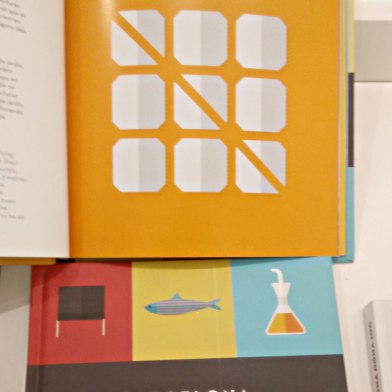 Here is one of the icons of Barcelona, the area of Eixample (Extension), with parallel and perpendicular streets, the specific chamfered corners and the Diagonal Avenue crossing them. “Ildefons Cerdà, the engineer who designed it, was inspired by the idealist texts of the 19th century. Although the initial layout of the project has been altered, the great number of trees, the width of the streets and the beauty of some corners still reveal its initial ambition to be an urban garden.”

The illustrated mezzanine or Altell Il·lustrat, the upper part of the walls of the bookstore, is a space for large-format graphic presentations created by various illustrators, with Barcelona as the central theme. It changes twice a year, around Sant Jordi and La Mercè. The artists that illustrate the venue are chosen by a committee of experts. Miguel Bustos, an illustrator and graphic designer from la Sénia, is the artist currently on display.

The bookshop’s catalog can be viewed on the website of Barcelona Llibres.