The tradition here in Spain is that Los Reyes Magos, the Three Wise Men or the Three Kings, are the ones who bring gifts to children, on January 6th.

According to Christian tradition, this was the day when Melchior, Caspar and Balthasar came to visit the baby Jesus and brought their gifts of gold, frankincense, and myrrh. Festivities officially start a day before La Adoración de los Reyes Magos.  Although sightings of Papa Noel are becoming more common in recent years, La Adoración de los Reyes Magos is, historically, the most important Christmas tradition in Spain. And this tradition comprises several steps:

On January 5th, all around the country, everybody gets out to enjoy the Cabalgata de los Reyes Magos, a reenactment of the arrival of the Three Kings.

Surrounded by dancers, musicians, and puppeteers, the Kings ride on camels or elaborate floats and throw candy or sweets down to the children. The spectacles are broadcast live on Spanish television. The town of Alcoy, in Alicante, is known to have the oldest Cabalgata parade in Spain (1885).

One of the biggest celebrations, in Madrid, draws crowds of more than 100,000 people, including thousands of children eager to catch some of the sweets thrown into the crowd by the three kings themselves (the total quantity of sweets surpasses 2 tons).

This year in Barcelona, the Three Kings will arrive by boat at the city’s port Moll de la Fusta at 4.30pm. As there will be processions in all districts, there will be no less than 18 Three Kings in the whole city. In the centre, the events will begin at 6pm on avenida del Marquès de l’Argentera, ending at 9.30pm at the magic fountain of Montjuïc.

On the evening of January 5th, kids leave out their shoes in a spot where the Kings are sure to see them.

They also set out plates of food or sweets for los Reyes, and something for the camels too, either dried grass or hay, or milk and bread. The next morning, children are delighted to discover that los Reyes have tasted the food or eaten it entirely. But most importantly, next to their shoes are the wrapped presents from los Reyes Magos, waiting to be ripped open.

Another important tradition, after the gift-opening, is breakfast with Roscón de Reyes, the King’s Ring, a delicious round cake with candied fruit on top. 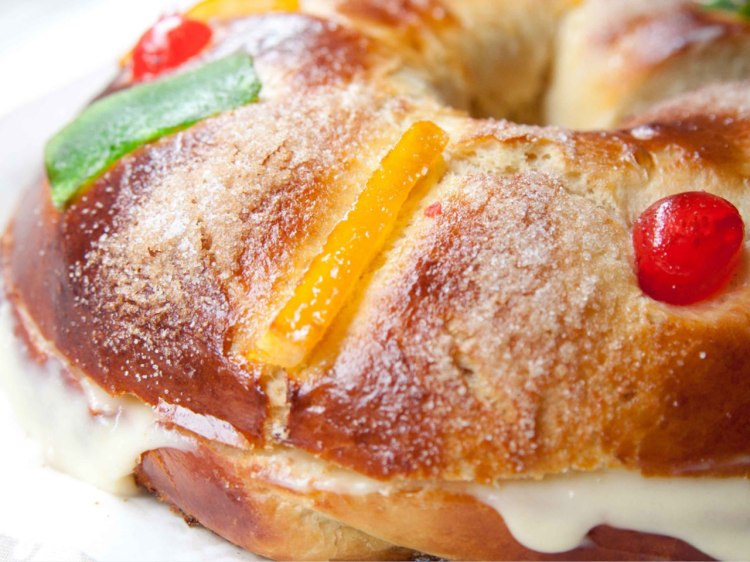 The fruit symbolizes the precious gems on the Wise Men’s clothing. Inside the cake, there are two plastic figurines: the king and the faba bean. Whoever gets the slice of cake with the king is the king (or queen) of the banquet, and will also have good luck for the whole year to come. And whoever gets the faba bean, will pay for the roscón.

Plus One More Lottery

For those who didn’t become rich with El Gordo, the Christmas lottery drawn in Spain on December 22nd, there is a second chance with El Niño, the January 6th draw that offers a prize pool of €700 million!

3 thoughts on “a Taste of Traditions | Los Reyes Magos”