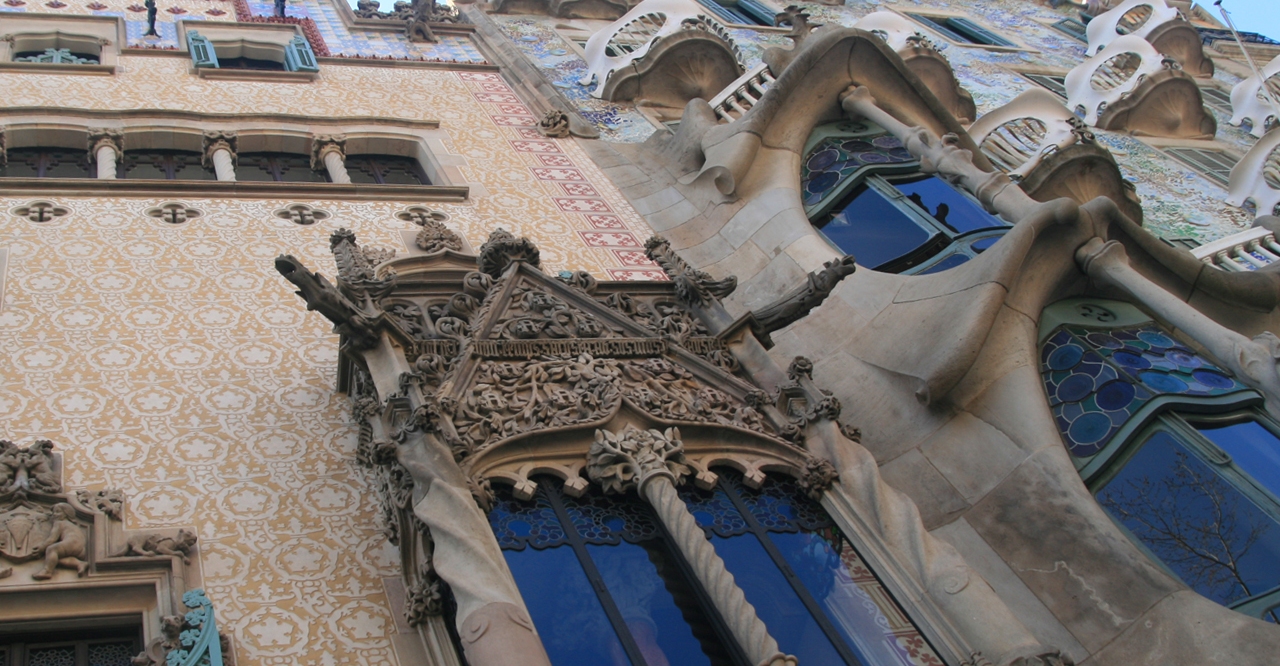 Illa de la Discòrdia or Manzana de la Discordia, namely the Block of Discord, is, maybe, the most famous collection of Modernist buildings in the city of Barcelona. They are sharing the same facade and display stunningly different architectural trends of the beginning of the 20th century.

There are 5 buildings that form this famous block. Curiously enough, none was actually built by the architects, even though the facade and interiors were completely transformed – and we know them today as Casa Lleó Morera, Casa Mulleras, Casa Bonet, Casa Amatller and Casa Batlló. And, among these 5, there are 3 that actually form this Apple of Discord, exactly as in the Greek myth where there were 3 goddesses participating in the competition to determine which of them is the fairest.

The words illa and mansana both provide a play on words. Illa de la discòrdia literally means block of discord and also references the English bone of contention. Mansana de la discòrdia means block of discord as well as apple of discord – the golden Apple of Discord in Greek mythology. The name thus refers to the presence of the major Modernista architects, all competing for the most impressive architecture on the very same city block – as well as the rivalry among their patrons to have the fairest building on Passeig de Gràcia.

Antoni Gaudí gave Casa Batlló, built between 1904 and 1906, a facade that is original, fantastical and full of imagination. He replaced the original facade with a new composition of stone and glass. He ordered the external walls to be redesigned to give them a wavy shape, which was then plastered with lime mortar and covered with a mosaic of fragments of coloured glass and ceramic discs. At the top of the facade, the roof is in the shape of an animal’s back with large iridescent scales. The spine which forms the ornamental top is composed of huge spherical pieces of masonry in colours which change as you move along the roof-tree from one end to the other. 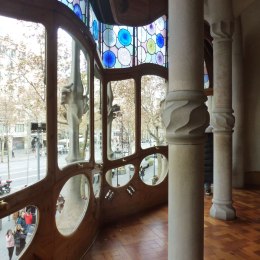 The long gallery of the main suite, the Noble Floor, overlooking Passeig de Gràcia, is composed of wooden-framed windows which are opened and closed by raising and lowering using counterweights. They are unusual in that there are no jambs or mullions, so that it is possible to raise all of the window panes and have a continuous panoramic opening running the full width of the room.

Casa Batlló facade includes slender pillars of Montjuic stone which form bone-like shapes and are decorated with typically modernist floral designs. The balcony railings are made of wrought iron cast in a single piece and are secured by two anchor points in such a way that the balconies partly project outwards. As a whole, the facade is a joyful and allegorical representation, full of organic elements and colours and charged with symbolism, a wonderful spectacle in the city which inspires the most sublime sentiments in all those who gaze upon it. The whole house is a dialogue between light and colour. 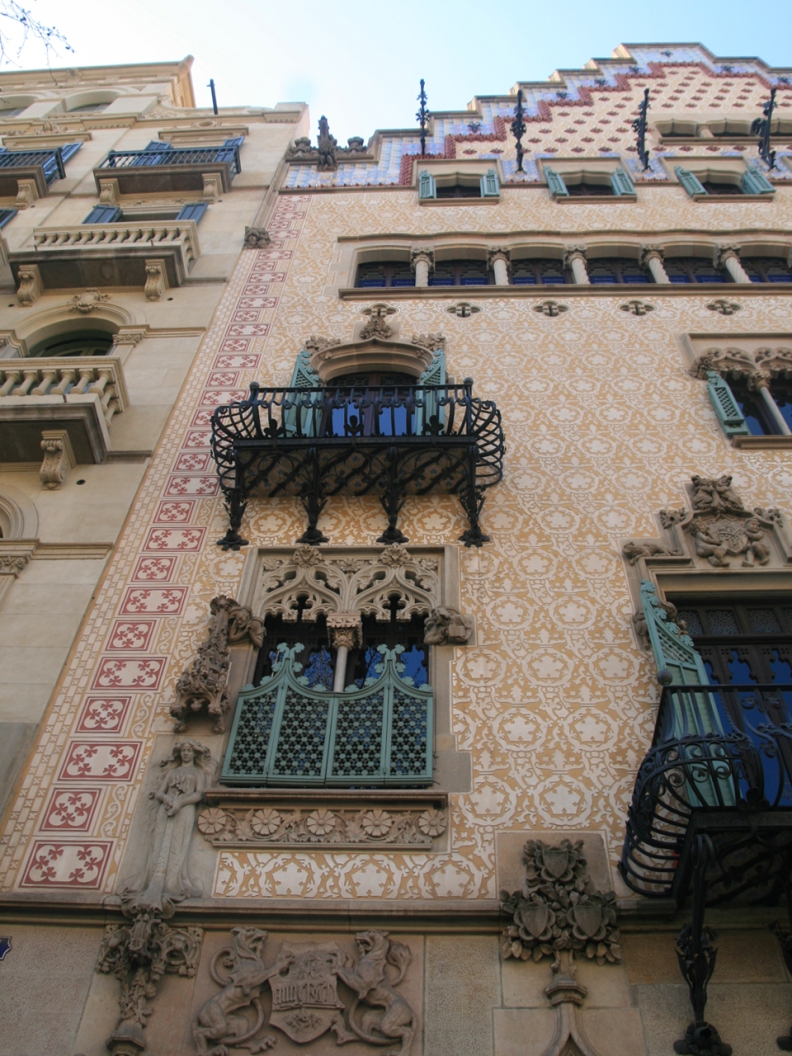 In 1898 the Amatller family commissioned the Catalan architect and politician Josep Puig i Cadafalch (1867-1956) to refurbish the building. Casa Amatller combines the neo-Gothic style with a ridged façade inspired by Flemish houses. Casa Amatller was declared an artistic historical monument in 1976. The facade features sculptures, cast iron works, sgraffito and brightly coloured ceramics to emphasize the original upper part of the building.

The owner of the house, Chocolatier Antoni Amatller, was also a photographer, hence an original detail on the facade – a stone sculpture of a vintage photo camera. On the ground floor of Casa Amatller, the cafe Faborit has got a beautiful terrace where one can enjoy coffee, as well as the famous hot chocolate of the house. 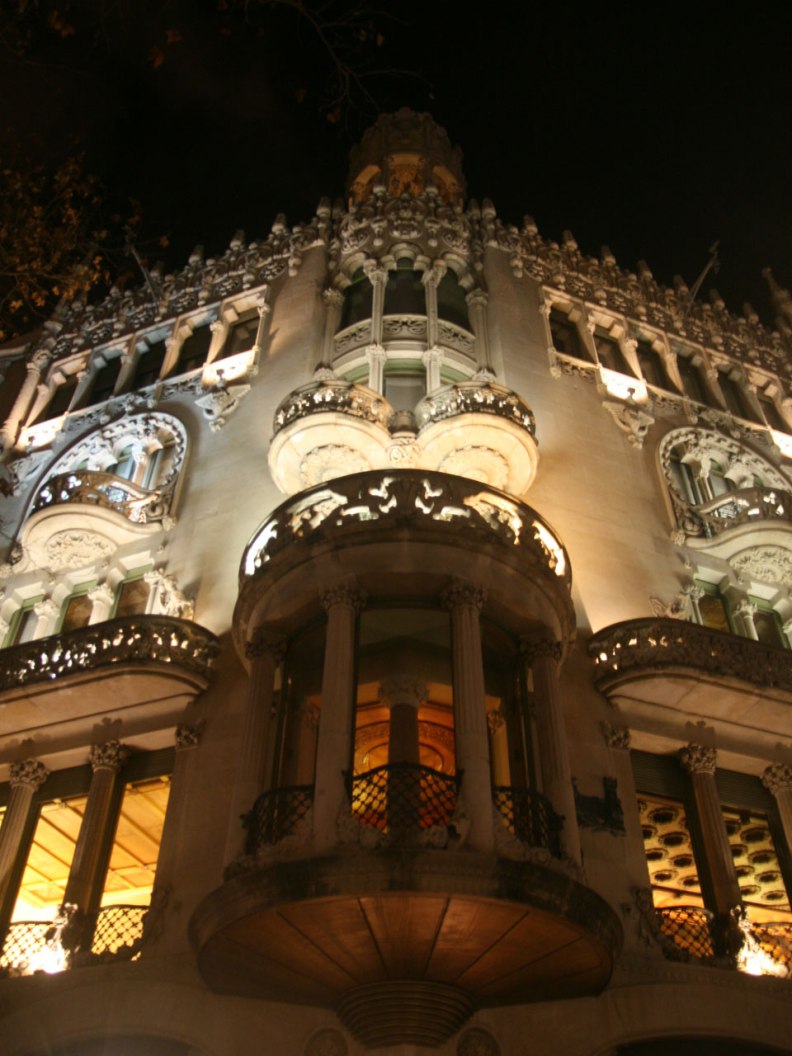 Casa Lleó i Morera, the work of the architect Lluis Domènech i Montaner, was also a refurbishment of previously built house, the Rocamora house. Carried out between 1902 and 1906, the project won the annual artistic buildings competition organised by Barcelona City Council. The interior is an astonishing collaboration between leading artists and craftsmen of the day and each room seemed to outdo the one before it with stained glass creations, sculptures, original parquet floors, woodwork and cabinetry, sculptures, mosaics, design, colour, and textures.

Passeig de Gràcia’s worldwide fame spread in the wake of the 1992 Barcelona Summer Olympics, when the prestigious U.S. urban designer Allan B. Jacobs discussed it in his book Great Streets, setting it on a par with New York’s Fifth Avenue and Paris’s Champs-Élysées. The long avenue displays a blend of unique architectural heritage, cafes, bistros, restaurants and high-end shopping. Until 1827, Paseo de Gràcia was named Camí de Jesús and joined the city of Barcelona with the neighboring town of Gràcia. With the demolition of the walls in 1854 and the start of the Eixample five years later, following the design by Ildefons Cerdà, Paseo de Gràcia became hugely important. 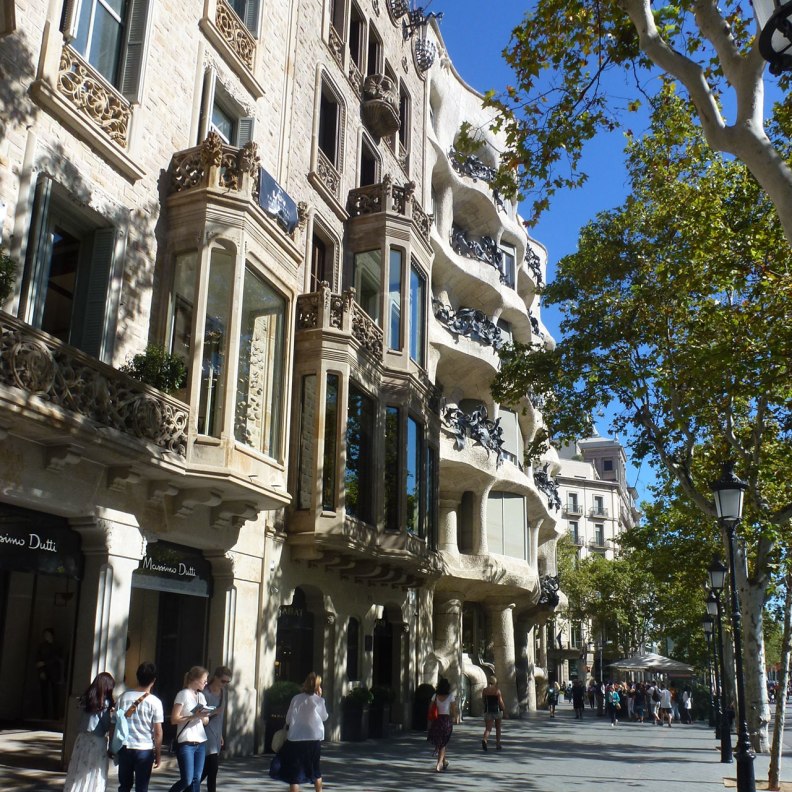 Initially single family homes with gardens were built there, and then coffee shops, theatres, restaurants and dance halls sprang up, making it the preferred leisure area for the bourgeoisie.

Later on, after the 1888 World Fair was held in Barcelona, these homes were replaced by four-storey buildings with shops on the ground floors. Slowly but surely, the bourgeoisie began to move into this street, and competed to employ the most famous architects to build or remodel the buildings that contained their flats, which were usually on the lower floors. The ground floors of the new buildings housed pharmacies, cinemas, restaurants, stores and grocer’s shops. (source). That is why we can now admire examples of the Modernist style that dominated the buildings along Paseo de Gràcia at the time.

3 Replies to “The Apple of Discord”