On Passeig de Gràcia, one of the most famous streets of Barcelona, there’s el Nacional: a busy restaurant with a lot of Iberian specialties and Catalan fresh products and mixes.

In fact, there are 4 different restaurants, here, at el Nacional, and each with its own specific: meat, fish, tapas & rice, and fast deli, and 4 different bars: beer, wine, cava and cocktails, respectively.

El Nacional is a 2600 square meters open space restaurant. It opened in October 2014  in a building that witnessed Barcelona’s industrial revolution, built in 1889 as café-theater, later transformed into a fabric dye factory, into a car dealer’s shop, before the Civil War, and ending just as a cheap garage, before el Nacional.

The fish restaurant is called la Llotja – meaning loggia, in Catalan, and right near the dining area there’s a display of fresh fish and sea food, on ice; among the specialties from the menu, there are anchovies from L’Escala or Sea Bream Baked in Formentera Sea Salt.

The meat restaurant focuses upon cooked on charcoal grill, in wood-fired oven or griddle. El Nacional recommends the Ox Burger or the Hand-minced Steak Tartar, as well as the steaks).

The Tapas & Rice restaurant has all the dishes auctioned Málaga-style by the waiters.

In Portugal and Spain, Goose barnacles are a widely consumed and expensive delicacy known as percebes (la Llotja menu). Percebes are harvested commercially in the Iberian northern coast, mainly in Galicia and Asturias, but also in the Southwestern Portuguese coast (Alentejo). In Spain, percebes are lightly boiled in brine and served whole and hot under a napkin.

Coca de recapte (la Paradeta menu) is a typical Catalan pastry, to be found in the areas of Gerona, Barcelona, Tarragona and Lérida, and consists of a dough mixed with escalivada (oven-baked peppers and eggplants) to which any ingredient can be added. The traditional ones are sardines, herrings or butifarra, even though today you might find them with tuna, onion, olives, or tomatoes. Due to its similarity to pizza, it is supposed that the origins of this plate date back to the Roman domination of the Iberic peninsula (el National offers Pastry with acorn-fed Iberian shoulder ham and rocket, Oil pastry with cheese, cooked ham and spinach, and Catalan crunchy bread with roasted vegetables and goat cheese, each for 8,5 euros).

As dessert, the traditional Catalan bread with chocolate, olive oil and salt, one of my favorite sweets, here, and of which I’ve told the story, a while ago, is a must. The chocolate is, of course, homemade, and it’s absolutely delicious.

The restaurants are on the lateral sides and the bars – in the middle. The atmosphere is the work of interior designer Lázaro Rosa-Violán who aimed to recreate the Barcelona of the thirties and forties with a cosmopolitan and relaxed touch. 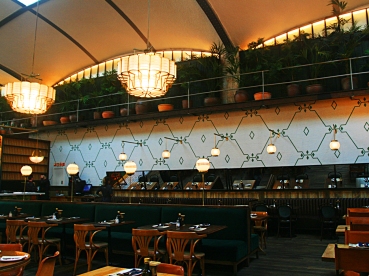 Below the vaulted ceiling with nice roof windows in the center of the vault, there’s a rich mix of ceramics, wood, metal, glass and lots, lots of plants. The patterns differ from one bar to another; from floor to wall; from central space to side space; from main entrance to rear entrance… 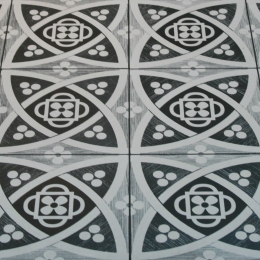 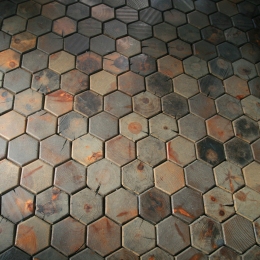 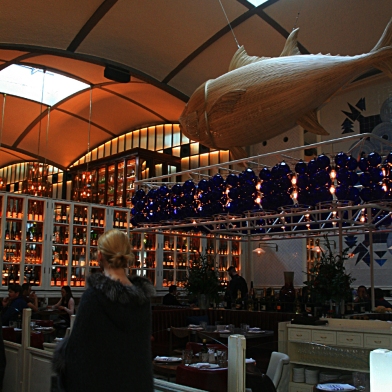 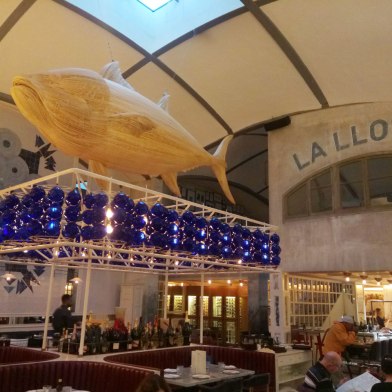