Laie Pau Claris is a nice place to escape the frenetic city life, right in the middle of it: it’s a library with a café – restaurant on the first floor, located in a typical Eixample building, only some 2-3 minutes away from Passeig de Gràcia.

The whole area around Laie Pau Claris is a nice place to go around, as the buildings, most of them built around the end of the 19th century, are nicely decorated with sgraffito and sculptures. The library is on the ground floor of such a building.

The quote is from Josep Pla, a Catalan journalist and a popular author, and the idea of his words would be that: “Everything was passing by, the hours, the coffee, and what did not happen at the coffee didn’t exist. The coffee sharpens the intelligence and reflects the socializing manners. The decadence of coffee implies the decadence of any sincere civilization.”

the Space & the Mood

Even if right in the epicenter of Barcelona, Laie Pau Claris doesn’t seem to be on the radar of most of tourists. Tough it can get pretty crowded at lunch, people mainly come here to read, to work on their laptops, to write, or to give private lessons, so the place has got a calm, cozy atmosphere. The bookshop is on ground floor and the café – on the upper floor, in a kind of a mezzanine, between the pastry bar and the restaurant with dining area, a covered terrace and an interior patio.

The space is naturally lighted by windows opening to the street of Pau Claris. 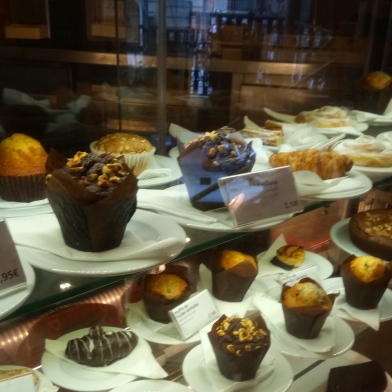 The bar of the cafeteria has got a nice sweet choice.

The link between the bookstore and the café is via a metal staircase that leads up straight to a wall filled with books – a selection of the library’s bestsellers alongside an impressive collection of books on Barcelona – on its history, on its ‘secrets in plain sight’, its neighborhoods, art, architecture, events, routes, passages, factories, dragons…

You can look through a book, while having your coffee at this library. And there are a lot of books that might get your attention and, even if you are not fluent in Catalan or Spanish, you can always take a look.

‘Luis Moritz arrived in Barcelona in 1851, from Alsace, and in 1856 opened a bar on carrer del Portal de Santa Madona 20, where he would sell directly to public the beer he would produce in a small factory in carrer d’en Cirés 6, also situated in Raval…’

The floors in ceramic tiles mosaic were a usual design in the end of the 19th century, when most of the buildings around were built. Each room of Laie has got its own pattern and a rich border to enclose it.

There is a nice and cozy dining space at Laie, separated from the library and the bar by a hallway.

The interior patio is especially great when you need a bit of sun.

The floor designs are very geometric.

Between two flooring designs, there are 3 other frames that close each design and, respectively, act as a border between the two. 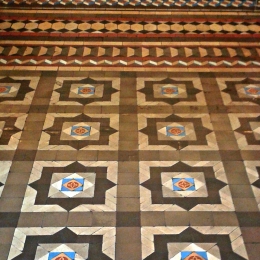 This particular design reminds me of Neo-mudejar art, maybe because od the 8 corner shape.

The cuisine of Laie is based upon fresh products from the orchard in El Prat and vegetables from a small culture in Baix Llobregat, and includes some Catalan dishes (coques de recapte or suquet de peix) as well as Mediterranean ones, while the wines are mainly Catalan. Most prices are above average still the taste and the atmosphere make everything a lovely experience.

Coca de recapte is to be found among the Starters, in the menu, and is done, at Laie, with goate cheese, onion and zucchini.

The Carpaccio has a homemade sauce and salad and comes with fresh bread and butter. All of the ingredients are tasty and they go together perfectly, still I want to emphasize a bit on the … butter. Yes. It is exactly the salt within Iberian butter that balances everything.

Laie is one of the lagest book chains in Barcelona, with several libraries across the city, including at the Design Museum, Picasso Museum, CCCB, la Pedrera of Antoni Gaudí, among may others. 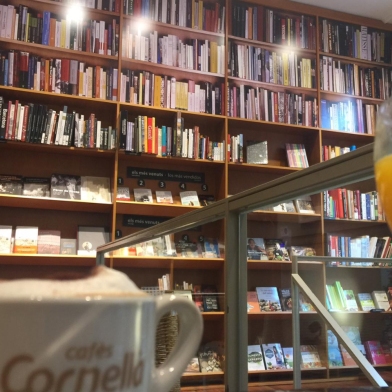 2 Replies to “Laie | Lunch at Library”