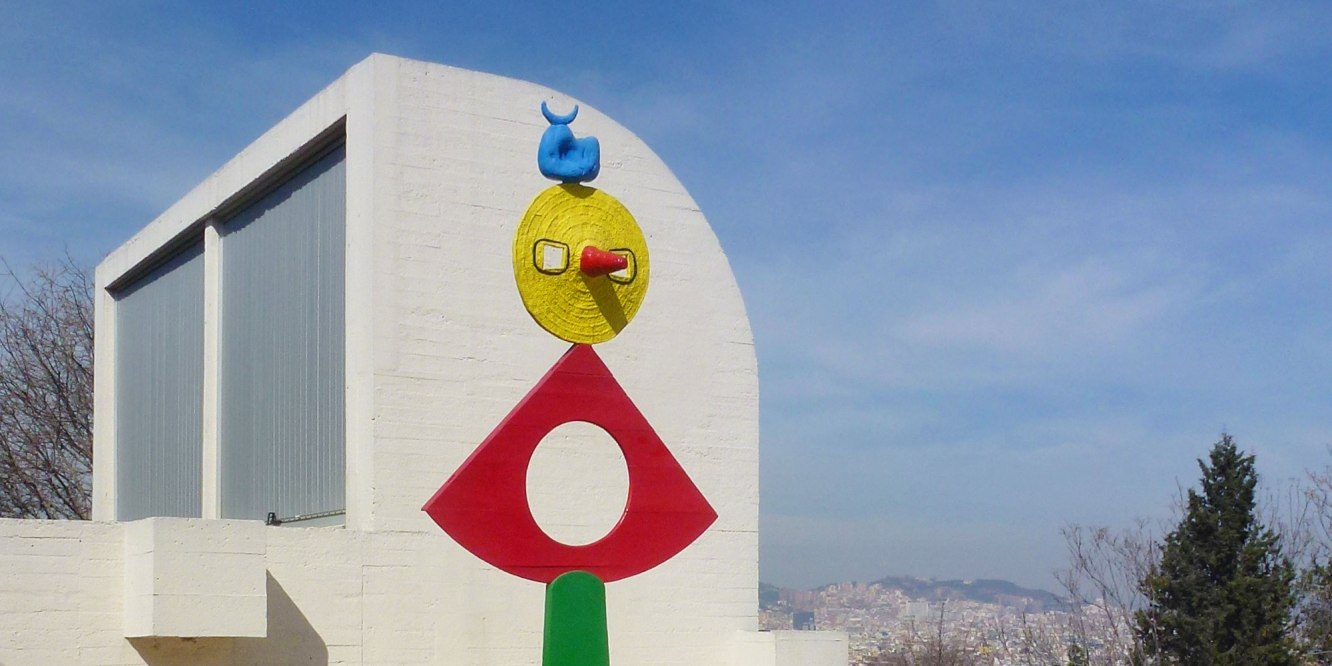 This is a virtual escape into the vibrant universe of Joan Miró. I used to go often to the Foundation, as I am fascinated with his work. Besides, the pass is not expensive – €13 for a full year.

From its position on the Monjuic hill, halfway between the castle and the city, the Joan Miró Foundation with its outdoor spaces is also a place to see Barcelona from above.

The upper terrace is my favourite, not only because it’s surrounded by vegetation, but also because it’s where some of the most playful artworks are on display.

A Tour of the Terrace

I didn’t know much about this side of Miró’s work before, and the playful sense of humour of his creations added much to my ever-since growing fascination for his three-dimensional visions. He used the main symbols of his paintings to describe women, sun, moon, or birds, and his saturated shades of yellow, red, blue and black, inspired by the Mediterranean landscape and climate, dominate. To all this, something unexpected adds: the use of found objects, from stones to straw hats and from taps to chairs, which made his close friend, Catalan art promoter Joan Prats, say:

Joan Miró, according to what I’ve been reading (see sources at the end of post) first explored three-dimensional objects in the late 1920s and early 1930 when, inspired by surrealism, he spontaneously combined everyday objects into a series of unique constructions and peinture objects. In 1945 he found a new direction that would fuel his sculptural practice and further root his creations into the natural world. One day while walking near his summer house in Mont-roig, he came across a rock which he reimagined as a head and had it cast in bronze.

“Transforming the meaning of everyday materials and finding magic in the elements of life shows his poetic soul.” Joan Punyet Miró

Miró began imaginatively combining his found objects with clay modeling to create assemblages, transforming the elements into poetic and suggestive sculptures that would be later cast in bronze. For several years in the 1950s he stopped painting, working on paper and in ceramics. His late works include mixed media paintings, prints and ceramics, and over three hundred bronzes, created between 1966 and his death in 1983.

Fundació Joan Miró was designed by architect and city planner Josep Lluís Sert (1902-1983), close friend of Joan Miró and an exponent of avant-garde architecture in Catalonia as one of the founders of GATCPAC (Group of Catalan Architects and Technicians for the Progress of Contemporary Architecture).

The main motif is a quarter of vault placed on the roof , and repeated time and time again like a wave, with the vertical surfaces that closing the vault replaced with glass, and turning into a skylight.

Although from the outside the effect is that of a wave, from the inside the light doesn’t pour in from the top down, but sideways, bouncing off the white interior of the quarter-vault and spreading almost atmospherically into all the corners of the space. The sunlight effect is undeniable still the hidden source of daylight generates a climate of mystery.

Architecture today has to be more functional and cannot exist without a sense of artistic values. Without them, we would produce buildings, but not architecture. Josep Lluís Sert