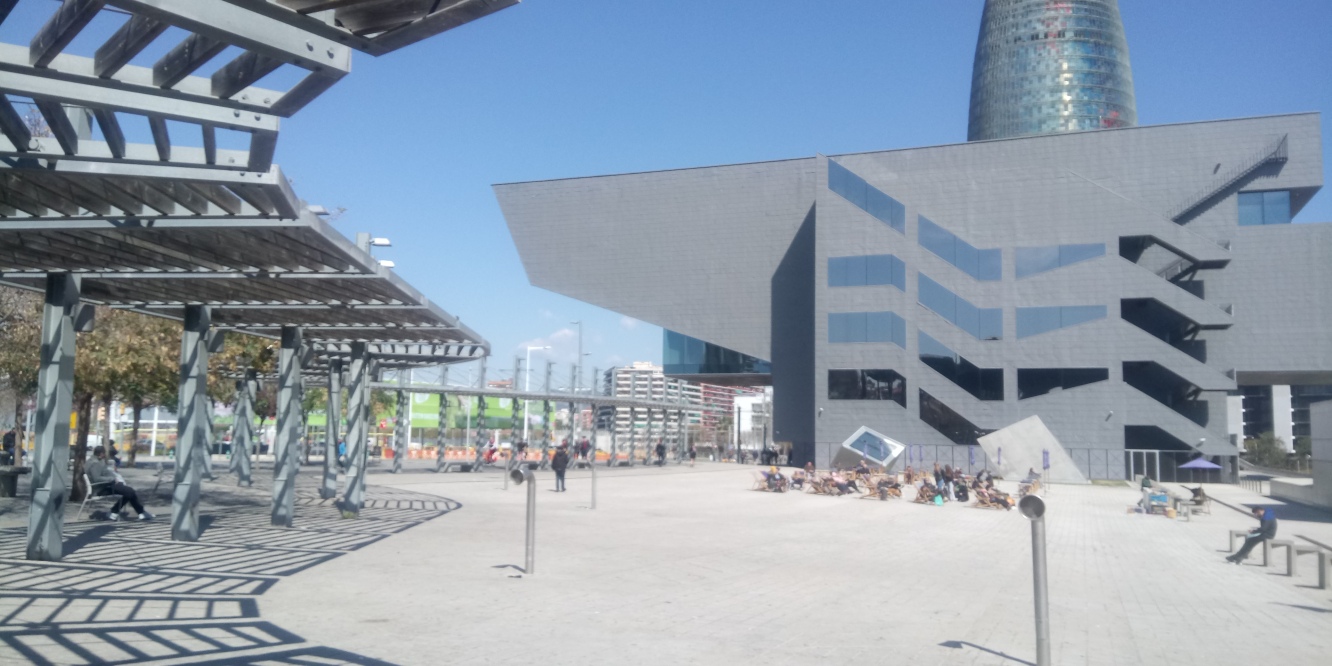 Gloriès square is just 10 minutes away from Sagrada Familia. It’s the place to enjoy the Design Museum of Barcelona, or just catch the sun at midday, relaxing on a lounger outside.

Disseny Hub Barcelona hosts the Design Museum of Barcelona. The building, gateway to 22@ – the innovation district of the city, hosts exhibitions, events, libraries and a nice cafe.

The museum was designed by MBM architecture firm, formed by Oriol Martorell, Oriol Bohigas and David Mackay, and opened its doors in 2014. The building consists of two parts: an underground one, using the level change caused by the urbanization of the Glories square, and one that emerges 14.50 meters above the ground. The latter is a parallelepiped bias cut with the same width as the Avila Street, acting as an indicator of the relationship between the Eixample streets and the Glòries square, without affecting the view of the large central park. The cover of the subway is a public space linked to the future project of the Plaça de les Glòries park. The green carpet is one of the important components and it is made with natural or artificial elements to ensure sustainability and easy maintenance.

The Cafeteria of the Disseny Hub opens towards the Elisava Gardens, the nice and quiet public area just behind Plaça de les Glòries. The outside terrace is a great place for sunny days.

The interior is a mix of undulated benches with kilim tapestry – Nani Marquina, with a very long bar in the shape of a large bookcase from where you can take your coffee, your lunch, a sandwich, a vermouth with some olives or their super tasty gluten-free brownie, my favourite. The service is run by the S. Sauleda Group

I come here pretty often for one of my favourite brownies. The sandwiches are also nice. And the exhibitions of the Hub, as well.

Overlooking the Encants flea market, the square in front of the Design Hub is one of the best places to catch the sun at midday, with plenty of loungers and chairs and benches to sit on. And by night it’s home for a nice interactive installation, called BruumRuum!

The square of Gloriès is also the place to discover the famous Torre Agbar. It’s also from where Diagonal Mar starts, displaying the steel and glass architecture of the technological district 22@, up to the Forum. It’s also from where the area of Poblenou, former industrial area now being readapted for the creatives of Barcelona, spreads until it reaches the seaside and the beautiful beaches of Nova Icaria, Bogatell, Marbella… Overall, a great place to start an original route of the city.

4 Replies to “The Design Museum of Barcelona”