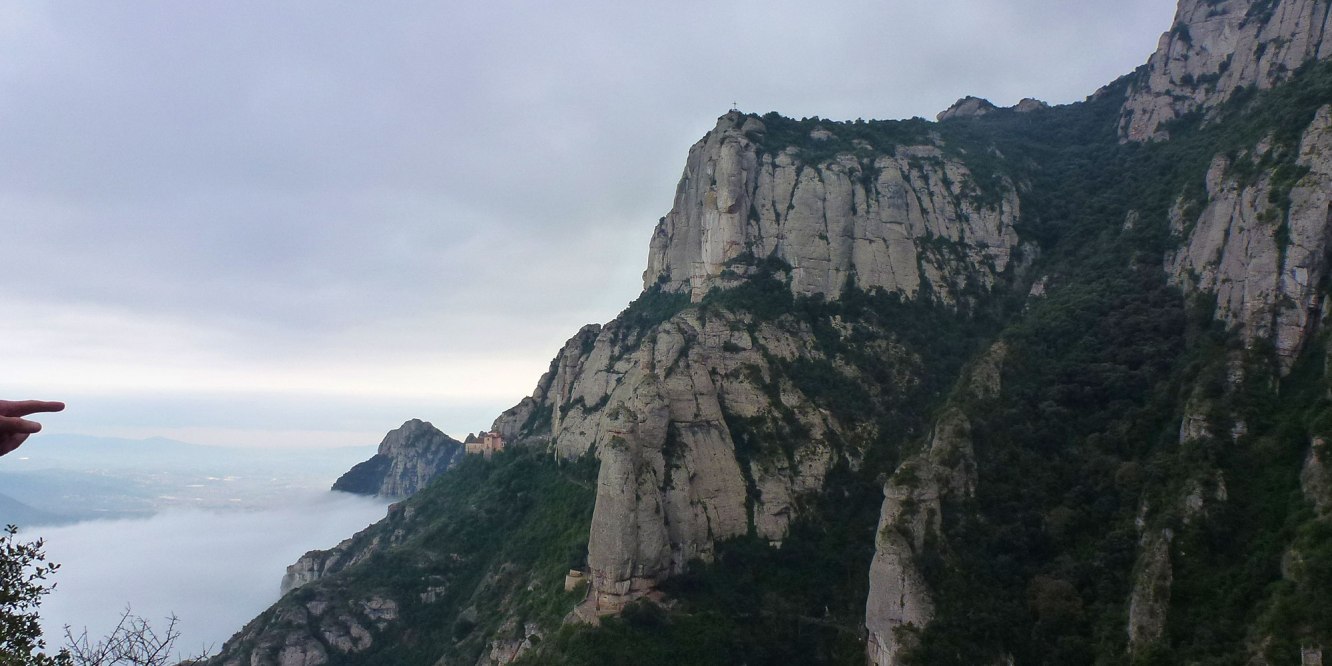 There are many reasons to go to Montserrat, this mountain is unique – almost strange in its uniqueness. Montserrat translates to “saw mountain” in Catalan, owing the name to its jagged appearance that projects upwards to the sky, dominating the landscape and fully justifying the name it’s been given.

Sitting atop the mountain range is Santa Maria de Montserrat, a Benedictine monastery. The dimensions of the construction are also impressive, and the contrast with the rocks is splendid. Located inside of the monastery is a statue of the of the Virgin of Montserrat, one of the few black madonnas of Europe. Its sanctuary is identified by some with the location of the Holy Grail in Arthurian myth.

As geological formation, it seems the origins of Montserrat mountain date back 50 million years, when the area was covered by the sea. The area was a gulf into which several rivers carried boulders and stones. Tectonic movements raised the mountain above sea level, where the forces of the sea, rain and wind eroded it to create the spectacular forms that we see today.

While nature has endowed Montserrat with a unique appearance, it is the spiritual aspect which has assured its claim to be a magic mountain.

At 1236 meters above the valley floor, Montserrat is the highest point of the Catalan lowlands, and is ideally located to play an important role in the cultural and spiritual life of Catalonia. The mountain Montserrat has been of religious significance since pre-Christian time. Before Christ a temple to worship Venus was built by the Romans. In the first written mention of 888 the adoption of the construction by the first monastery of 880 AD was reported. They were hermit monks, who built various hermitages on the Montserrat. The monastery was founded by expanding the hermitage of Santa Maria 1025.

The legend says that shepherds saw a glowing light over the mountain in the year 880. Drawn onwards by the light, they ventured into the higher reaches until they came to the place known today as the Santa Cova, the Holy Cave, where they discovered the image of the Mother of God with Jesus on her lap which today is known as the Moreneta because of its black colouring. They rushed to inform the Bishop of Vic, who ordered that the image be transported to Manresa. This turned out to be impossible, however, because the statue became heavier and heavier as it was moved. The Bishop interpreted this as the desire of the Virgin to remain in Montserrat, and he ordered the building of a chapel for her. This was the origin of the later Benedictine* monastery and abbey dedicated to the cult of the Mother of God of Montserrat, a place of pilgrimage for thousands of Christians, and as many tourists in modern times.

Numerous famous personalities went on pilgrimage to the Montserrat such as Columbus, Cervantes, von Humboldt, King Fernando and Isabella, Carlos I, Felipe II and Louis XIV. Columbus named an Antilles island Montserrat on his second trip in 1493.

One of the visitors was the German anthropologist Wilhelm von Humboldt, whose essay on Montserrat written in 1803 was to influence and inspire a fascination with the iconic mountain among the German Romantics, such as Goethe and Schiller. Humboldt described his mystical experience among the trees and mountain slopes as a connection with nature that exalted the soul of man. It is a profound emotion that affects all those who visit Montserrat.

The French War (1808-1811) brought destruction and abandonment, but in 1844 restoration of monastic life began. In the times of the Franco dictatorship the monastery put up resistance. Despite the ban, Catalan was still spoken and fairs were held in Catalan, and hundreds of persecuted of the regime hid here, as a result more than 20 monks were executed. This resistance made the monastery an important symbol of Catalan self-evident and the fight against oppression.

The mountain of Montserrat was also declared a «UFO sanctuary» in 1977 thanks to Luis José Grifol**, who arranges gatherings on the esplanade outside the church on the 11th of each month to spot UFOs.

Getting to Montserrat from Barcelona is quick and easy. Train plus cable car is the quickest and most scenic option. The journey by train takes approximately one and a half hours and, from Aeri de Montserrat, the cable car takes you right to the top. The rack railway (la cremallera) is another option, but takes a bit longer. As for hiking, for instance, once you’re up there, then Funicular de Sant Joan takes you to a very high observation point. From here, you can start the hike to Sant Jeroni, the highest peak on Montserrat. For the best views while at Montserrat, consider doing this 3 hour return hike.

* The Benedictines, officially the Order of Saint Benedict (Latin: Ordo Sancti Benedicti, abbreviated as OSB), are a monastic Catholic religious order of monks and nuns that follow the Rule of Saint Benedict. They are also sometimes called the Black Monks, in reference to the colour of its members’ religious habits. Despite being called an order, the Benedictines do not operate under a single hierarchy but are instead organised as a collection of independent monastic communities, with each community (monastery, priory or abbey) within the order maintaining its own autonomy. Unlike other religious orders, the Benedictines do not have a superior general or motherhouse with universal jurisdiction. Instead, the order is represented internationally by the Benedictine Confederation, an organisation that was set up in 1893 to represent the order’s shared interests.