A pioneering example of new architecture in the Eixample district, this building marks the transition from eclectic architecture, characteristic of the late 19th century, to the new Modernista (Catalan Art Nouveau) style.

Designed by architect Lluís Domènech i Montaner, the building was constructed between 1881 and 1885 as a publishing house for Montaner i Simón. The design integrates completely new materials, more characteristic, back then, to markets and railway stations – exposed brick, iron and glass – into the fabric of the bourgeois urban centre.

The façade combines classical stylistic influences – visible in the composition with a central entrance volume and two symmetrical side bodies – with Mudejar (Moorish) elements and geometric arabesque composition, and the use of exposed brick. Sculptural busts and names of literary figures (Shakespeare, Cervantes and Dante) at the top of the facade allude to the function as a publishing house.

The interior was completely restored by architects Roser Amadó and Lluís Domènech Girbau, turning it into today’s Fundació Antoni Tàpies museum, and reorganising the space to provide exhibition rooms, an auditorium, offices and storerooms while respecting the original structure. The former publishing house’s warehouse, whose shelves have been conserved, was turned into a library. 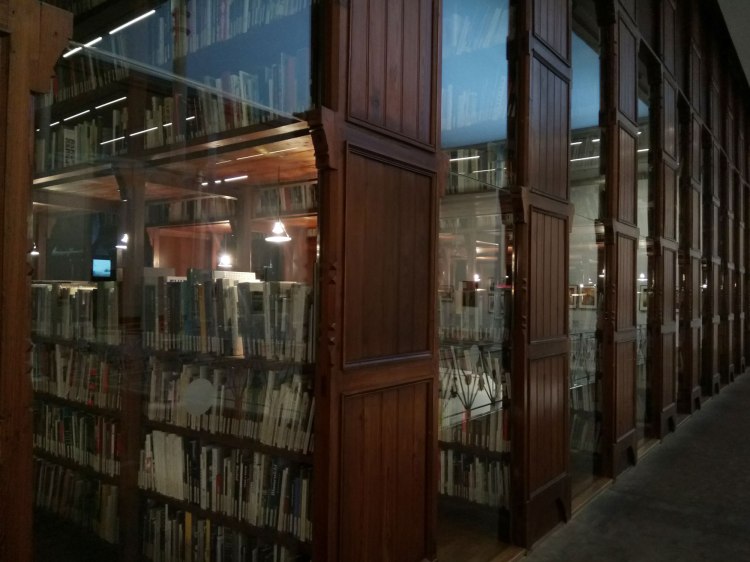 In 2008-2010, a new three-storey pavilion, separated from the historic building by a courtyard illuminated by a skylight, provided for new exhibition spaces and allowed all the rooms to be rearranged and extended, including the reception area (extension by Ábalos-Sentkiewicz architectural studio).

The Fundació Antoni Tàpies was created in 1984 by the Catalan artist himself to promote the study and knowledge of modern and contemporary art. Opened in 1990, the Foundation owns one of the most complete collections of Tàpies’ artwork, largely made up of donations by Antoni and Teresa Tàpies, and combines temporary exhibitions, symposia, lectures and film seasons with a range of publications that complement the activities and periodic shows of Tàpies’ work.

The installation crowning the building is actually one of his works. Núvol i cadira (Cloud and Chair) has become a veritable emblem of the Foundation. Besides acting as a foreplay of the artworks displayed inside, the sculpture (which by the way is lit by night) resolves the height differences between the building of the Foundation and its neighbours.

Antoni Tàpies (1923-2012) was a Catalan artist, painter, sculptor and art theorist, known for his mixed-media works. Tàpies was perhaps the best-known artist to emerge in the postwar period. Starting his career influenced by his friend Joan Miró, his work is associated with both Tachisme and Abstract Expressionism. “If one draws things in a manner which provides only the barest clue to their meaning, the viewer is forced to fill in the gaps by using his own imagination,” he reflected*. “He is compelled to participate in the creative act, which I consider very important.”

Achitect Lluís Domènech i Montaner (1850 – 1923) is one of the most important protagonists of Catalan Modernism, and several of his works have been recognized as UNESCO World Heritage sites. He studied architecture and mathematical physics and graduated in 1873. After having graduated he travelled around Europe, meeting the artistic elite and discovering new architectural trends. Upon returning to Barcelona, he joined the School of Architecture as a lecturer, then as professor, and then became its director in 1900, training, among others, students such as Josep Puig i Cadafalch, Antoni Gaudí or Josep M. Jujol, and overall exercising a considerable influence on what was to become Modernisme in Catalonia.

Domènech i Montaner also stood out as a designer of typefaces and book bindings, and as a book illustrator. He also collaborated with the main Catalan publications of the time such as La Renaixença, La Veu de Catalunya, and founded the magazine El Poble Català. He published many books and articles, and through the family business, the editorial Montaner i Simon, he initiated and directed the art encyclopedia Historia General del Arte, later continued by Josep Puig i Cadafalch.

Domènech i Montaner was one of the founders of political Catalan nationalism and founder of the Regionalist League, which soon became the main political force in Catalonia. He focused in the world of politics in 1870, and committed to his belief in Catalan nationalism, he also founded the Catalanist Union in 1891. He chaired the assembly that drafted the Bases de Manresa, the document that served as the basis for the self-government of Catalonia. He became a member of the Spanish Parliament in 1901. Because of disagreements with political leader Francesc Cambó, he split from the party in 1904 and distanced himself from politics to focus on research and history.

10 Modernist Buildings You Should Know

One thought on “Fundació Antoni Tàpies”