Montcada street is home to notorious Museu Picasso but not only: it is a beautiful collection of Gothic palaces hosting museums and entertainment shows, and sprinkled with some original stops ranging from contemporary art to a tapas bar who produce their own homemade sparkling wine.

This area was the commercial heartland of medieval Barcelona. Five of the mansions on the east side of the street have been linked to house the Museu Picasso. Another palace, Dalmases, hosted the Academy of the Sceptics, in 1700, then the Academy of the Arts, and now – a venue where you can sip wine or cocktails (both rather expensive) inside the baroque courtyard and theatrical interior of the palace, while listening to baroque music or operatic snippets, or while attending an evening of Flamenco.

Carrer de Montcada starts with the Romanesque Marcus chapel (12th century) and finishes at Plaça del Born. It used to be all one single street until the 19th century, when it was divided into two by the opening of Carrer Princesa in 1853.

The Montcada family from Barcelona received the land in the 12th century for the support lent to King Ramon Berenguer IV by Guillem Ramon de Montcada during the conquest of Majorca.

The first homes outside the city walls emerged in the mid-12th century. The street linked the Bòria commercial district with the old sailing quarter of Vilanova del Mar, leading to the creation of the Ribera district.

At the end of that century, the area was incorporated into the new city walls, experiencing its greatest splendor from the 15th to the 16th century. It was then an aristocratic street inhabited by noble families and rich merchants who had earned their fortune from the sea trade.

At the end of the 19th and in the early 20th century, the street underwent significant alterations and a decline in the area’s residential nature. The street was declared an artistic-historical heritage site in 1947. Picasso Museum was first opened in the Gothic Aguilar Palace Palau (Montcada, 15) in 1963. The City Council extended the museum by annexing Palau del Baró de Castellet (Montcada, 17) in 1970 and then with Palau Meca (Montcada, 19). A new museum extension was opened in 1999 at the Casa Mauri and Palau Finestres with space for temporary exhibitions. These five palaces make the Barcelona Picasso Museum. 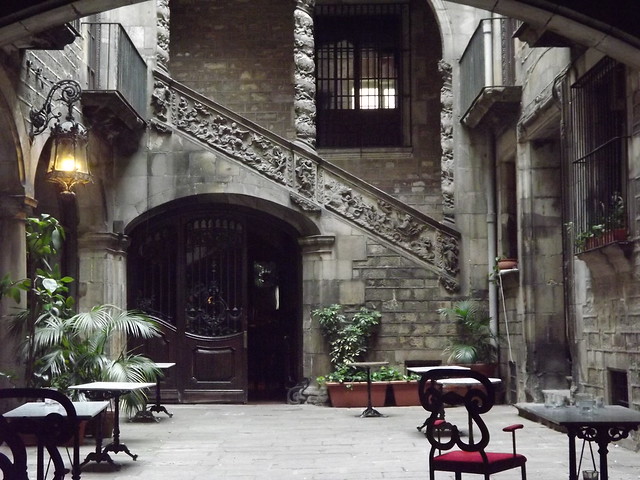 The building alone is well worth the visit, bearing witness, as it did, to the growth of the city. In the 16th century, Carrer Montcada was home to the palaces and residences of the city’s most notable and influential families.

The building known as Palau Cervelló is located at nº 25 of Montcada (traditionally, the stately homes of Montcada street are referred to as palaces, incorrectly so if we consider not only their typified construction but also their promotion. These buildings were promoted by some of the most influential families of the Barcelona upper class, none of them nobility). In Palau Cervello’s case, proof materials hail back to the 14th century, in spite of later reforms. The building underwent numerous interventions throughout its history that significantly altered the original medieval architectural project. The façade strands out for its disparate stylistic elements, corresponding to these different interventions it underwent.

The exposed patio is one of the site’s most emblematic characteristics and, in general, one of the most relevant elements in Barcelona’s historical residential architecture.

There’s an interesting noble stone staircase to access the first floor (the exhibition space); one of the most unusual examples of covered staircase of 16th century architecture in Barcelona. The great arches that configure the rampant staircase cover are supported by svelte columns, that possibly, given their typology, were taken from a 16th century gallery found in one of the patio’s façades.

The openings located on the different façades are the result of diverse interventions, which result in the coexistence of mullioned windows with pointed lintels (13th – 14th century), girdled windows with carved corbels (16th century), straight lintels and banded doorjambs (17th and 18th century). We can also observe 19th century remodeling, mainly to fix or modify the accesses to the different rooms of the building. Palau Cervelló was home to the Cervelló family until the 18th century, at which point it was acquired by the Giudice family, of influential Genovese commercial lineage. In the 1950’s the building belonged to the marquis of Vilallonga, at which time a major restauration project was undertook by the Municipal Conservation Service and Monument Restauration.
Since 2015, Palau Cervelló is home to Fundació Gaspar of Contemporary Art.

Café Ena was a pretty cheerful space, full of posters collated on one of its walls. The posters belong to Braque, Chagall, Calder, Dalí, Pollok, de Kooning, Chillida, Sam Francis or Warhol, among many others: the artists exhibited at Sala Gaspar, decades ago, and they designed their own posters.

The café’s fresh and informal style was designed by artist Javier Plácido. Ena is a nice place for opening your laptop and working for a while, as it’s quiet and calm, wi-fi works good and there’s a nice menu to choose from. There’s also a bookstore, here, at Fundació Gaspar, selling posters, souvenirs, small decoration and an extensive selection of art books, magazines, catalogues and vintage posters of the artists who participated in past exhibits at Sala Gaspar.

Further on the street of Moncada, El Xampanyet bar is a family business established in 1929 and it’s named after the homemade sparkling wine that they serve: cava, or the Catalan champagne. Despite its touristy location, it continues to uphold all the traditions of an old-school bar, with its blue-tiled walls and marble tables, and its no-reservations, no-website, no-nonsense approach to food and drink. The bar is always incredibly busy and crowded, and you’ll have to jostle to find standing room. Some say that El Xampanyet is like a Catalan version of “Cheers”; by your third visit, you’ll be treated like a regular and everybody will know your name.