A former food market. An archaeological site to witness the city’s past. Plus a restaurant to taste Catalan dishes. This is el Born cultural center.

Facing a generous square, the structure of el Born CCM spreads almost between 3 streets, the access gate being right in front of Passeig del Born, one of the mostr important streets of the district of el Born.

An entire and highly valued archaeological site spread on the entire underground of the former market.

The market of el Born opened in 1876 and was the first large-scale cast-iron building to be erected in Barcelona. It fulfilled its role as a market for 95 years, first being the local market for the neighborhood, and, since 1921, becoming Barcelona’s main wholesale market for fruit and vegetables.

In 1971, the market was closed as an archaeological site, revealing traces of demarcations of the streets and houses of Barcelona of the 1700 s, was found in the subsoil. In 2013, the place opened its doors as el Born Cultural and Memory Center, revealing its completely restored structure and finishes, as well as the underground ruins, witnesses of the consequences of the Siege of Barcelona (1714) during the Spanish Civil War. The 8,000 sqm surface of the space now includes exhibition and event spaces, a library and a gastronomic space.

There are lots of information about history and architecture, displayed on the panels surrounding the ruins.

The floor of the former market was cut out in order to reveal the walls underneath. 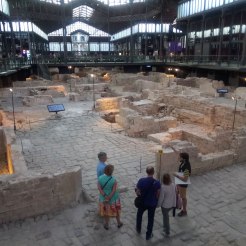 The center offers guided visits of the ruins.

Besides the ruins in the center, the interior shows some images depicting the history of the market of el Born.

The scene of a long, intense fight for recognition by residents, between 1971 and 2001 the Born became one of the hubs of Ciutat Vella, perfect for the large-scale activities that needed a big, covered, enclosed venue: concerts, political rallies, exhibits, fairs, theater and festivals. All of these found their place within the old structure of the former fruit and vegetable market, while the echoes of Franco-ism could still be heard in the squares and streets. Quite a varied combination of events that gave this area a whole new personality, and breathed new life into this space and the neighborhood that was struggling to re-emerge among the first glimmers of the democratic transition. The Born welcomed the flourishing social and artistic activity of the time, which was at once exciting and uncertain. 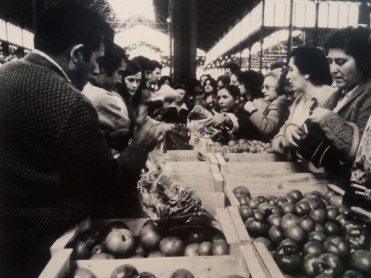 Records of the Born market date back to medieval times, in the square bearing the same name. Over the centuries, trade was conducted in the open air, until the market stalls found a new home inside the recently constructed metal building in 1876. From the second half of the 20th century, this became the main wholesale fruit and vegetable market, until these activities were moved to the Mercabarna logistics centre in Zona Franca in 1971.Thus began a new era for the Born. Amidst revindication and uncertainty, it became a space that was used in a totally different way from its previous life as a market. The photographic legacy of that time allows to delve into the main events.

The restaurant within the cultural center, El 300 del Born, has a lovely view towards the ruins and also recalls the historical atmosphere of the market through large, back lighted prints. Why el 300? To emphasize its opening exactly 300 years after the siege of Barcelona that ended, on September 11, 1714, with the capitulation of the city, thus with the abolition of all Catalan laws and institutions.

The menu is focused upon the regain and update of the traditional Catalan dishes. It is inspired from history, as well as legends, and includes features of market kitchen, to recall the anterior use of the space – all of the dishes with a slightly contemporary touch from chef Jordi Vilà.

Bombes de la Barceloneta are, by excellence, the tapa of the city. The name indeed translates into the bombs of Barceloneta, the neighborhood of Barceloneta being the place of birth of the recipe.

A typical Catalan pastry, to be found in the areas of Gerona, Barcelona, Tarragona and Lleida, coca de recapte consists of a dough mixed with escalivada (oven-baked peppers and eggplants) to which any ingredient can be added. The traditional ones are sardines, herrings or butifarra, even though today you might find them with tuna, onion, olives, or tomatoes. Due to its similarity to pizza, it is supposed that the origins of this plate date back to the Roman era of the Iberian peninsula.

A mix of shredded salt cod, tomatoes, onions, olive oil and vinegar, salt and, sometimes, with a garnish of olives or hard-boiled eggs, esqueixada is often described as the Catalan ceviche because it is made with raw fish in a marinade (even though the fish is salt-cured and dry). The name of the dish comes from the Catalan verb esqueixar, to tear or shred. The salt cod in the dish is always shredded with the fingers, never sliced or chopped, to achieve the correct texture.